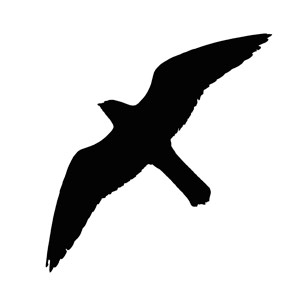 OLLÉ A. &  MONTRÀS-JANER T. 2020. How to sex Eurasian Hobby in juvenile and transitional plumage. www.raptoridentification.com

Adult birds are relatively easy to sex if we can properly see the undertail coverts, the vent and the trousers, area known as the ‘red patch’. In females, the red patch is stripy, with a variable number of dark stripes. In males, the red patch is uniformly red, often with some little fade stripes not obvious in distance. Nevertheless, some males can be just as stripy as the females. Therefore, while a non-stripy red patch is definitely identifying males, the opposite may not always be true and we recommend to always look at the overall structure of the bird. Some authors have mentioned that old females can have ‘only a few stripes’, just like males do. Yet, we have not been able to confirm that (using a sample of birds aged till 5cy).

Photo 1: adult Eurasian Hobbies. Male on top. Notice the uniform red on the male and the numerous dark stripes on the female red patch. ©Jordi Bermejo.

Photo 3: breeding male with obvious dark stripes across the red patch, showing that there is overalp between individuals and therefore, this is not a characteristic that can be considered alone to sex individuals, contrary to what is usually published. ©Gabriel de Jesús.

1cy birds do not have red coloured patch, but cream coloured. As in adult birds, males usually have no stripes across the undertail coverts and trousers, but there is overlap. On the other hand, females are usually more obviously stripy, especially on the trousers, with wider stripes.

Juveniles go through a partial moult on their wintering grounds (during their first winter) that affects body and facial feathers (no flight feathers). But there is a lot of variation amongst individuals up to the point that, when these birds reach Europe in April, some have extensive red patches while others, barely have any red at all. In general, red patches in transitional birds are never as intensive (nor extensive) as in adult birds.  Apparently, males seem to moult a larger amount of red feathers tan females.

Transitional females also have dark stripes across the red patch, but far less obvious than in adult birds and in some case, stripes may be even missing. As in adults, transitional males may also have stripy-dark red patches. In this case, the stripes are much thinner and scattered than in females. However, overlap amongst individuals may occur and then, we need to weight in other traits such as the overall structure of the bird (i.e. smaller bodies and proportional bigger head in males).

Photo 10: 2cy, spring. This bird is very difficult to sex. It hardly moulted in the wintering grounds and the juvenile feathers are very worn. ©Alex Ollé.