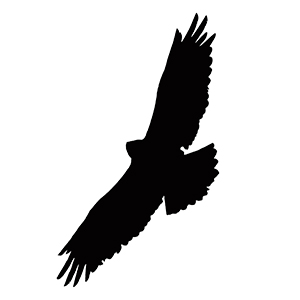 Short-toed Snake Eagle displays four plumages that can be identified in field, namely juvenile, 2nd, 3rd and adult plumage. Juveniles (1cy) and adults (+ 4cy) are the easiest to recognize. Intermediate plumages from immature birds are somehow trickier. However, with good photos and some practice they are relatively easy to age too.

Immature birds are in general brighter than adults. Moreover, an irregular margin along the wing’s edge reveals two different generation of feathers and two (or even three) moult fronts, differing from the juvenile plumages (which have none). The extension of the synchronic moult in both wings determines the age.

JUVENILE. This is the plumage the bird acquires at the nest, and the plumage the bird will keep until the end of the winter or beginning of the spring (i.e. in its 2cy). At that stage, the moult has not started yet. Thus, there is only one generation of feathers, no moult fronts and the margin along the wind’s edge is uniform. Juvenile birds have a pale brown or cinnamon coloured hood, upper part of the chest and, up to a higher or lower degree, lesser and median underwing coverts. The flight feathers (primaries and secondaries) on this plumage are very different from the ones on an adult plumage, displaying only a subtle dark fringe along the margin of the wing with up to two (at the most) very thin fringes (often partially or totally missing). The tail shows much thinner stripes in juveniles than in adult birds.

Immature birds are those with the so-called 2nd and 3rd plumages, between 2cy spring and 4cy summer. They are non-breeders and the plumage differs from that on adult birds as follows. Immatures are very bright, even in long distance, with no uniform pale brown or cinnamon hood nor large dotted area across the underwing covers. The fringe along the wig’s margin is not uniform but very irregular. However, and opposite to adult birds, the moult is synchronic in both wings. Many birds in their 1cy and even 2cy summer remain in Africa. A few of them fly to Europe, although they tend to remain within the Mediterranean region. Accordingly, individuals marked with transmitters have shown many of them only reaching to North Africa and not crossing into Europe. These individuals often occupy flat plains with high foraging resources (differing from the mosaic habitats occupied by the European breeders), wandering around with no fidelity nor roots for any special site. Immatures in their 3rd plumage (3cy or 2nd summer) are still non-breeders. Nonetheless, some of these birds, especially those in their 4cy, might join the breeding birds and perhaps even support them in some way before finding a territory of their own.

SECOND PLUMAGE. This is the plumage juvenile birds acquire when they start moulting. The first feather to moult is the innermost primary (p1). The moult usually starts sometime during the first couple of weeks of April, although it has also been registered starting from end of March and as far as beginning of May. At this age, the spring migration starts later than for adults, probably due to that these birds have no rush to reach anywhere in Europe and occupy a territory. In that sense, some birds start moulting in Africa, suspend their moult during migration, and restart again once they reach Europe, showing one or even 2 moulted primaries (p1/p2). Other birds though, migrate a bit earlier and so they have no moulted feathers yet during their journey. Once they reach Europe, the moult starts. The moult progresses orderly towards the outer parts of the wings. In October 2cy, four to six inner primaries (p1-4/6) are already moulted. At this point, the autumn migration starts and the birds suspend the moult. In this plumage, very few secondaries are moulted. At the most, the most external (s1-2), the central (s5), and the most inner (tertiaries) feathers which usually, will not be moulted until at least the two or three innermost primaries are moulted. The tail feathers normally moult completely, starting at the centre of the tail (r1).

THIRD PLUMAGE. During the 2cy winter, from November to February, most birds winter in Africa. The conditions there are optimal to keep with the on-going moult of the remiges. Now is mostly the turn of the secondaries so that, in the 3cy spring almost all of them will be new. All tail feathers will moult to the ‘second generation adult type’, with a much wider subterminal fringe. As for the primaries, birds can moult either none of them or up to two of them, carrying on where the moult was suspended in October 2cy. In this way, in spring 3cy all these birds reach Europe with a moult that varies extremely from individual to individual. In general, they are very bright birds and the ageing would be reflected in the extension of their moult, with two moult fronts (still synchronic) on the inner and outermost primaries. This age is difficult to assess. If we can identify that the bird has none (or very few) juvenile secondaries in spring, that would separate this from a 2nd plumage individual. In spring, one of the outermost primaries is usually moulting (p8-9 or 10). At the same time, another moult front appears in the innermost primaries (p1-2). The moult will progress during the 3cy. In October 3cy, all individuals will have no juvenile feathers, the inner and outermost primaries completely new (reaching around the p3 or 4) and the central primaries somehow worn out.

FIRST ADULT PLUMAGE or SUBADULT. This is the previous to the adult plumage. There is no remaining juvenile feather amongst the remiges. The moult fronts are still symmetric, up to a large extend. Some individuals can achieve this plumage already during summer 3cy while others will reach there as late as in spring 4cy. All and all, from the 4cy summer is very difficult if not impossible to age birds in field. However, there are some characteristics that may remain until the 5cy such as a bright throat and a relative simultaneity of the moult fronts.